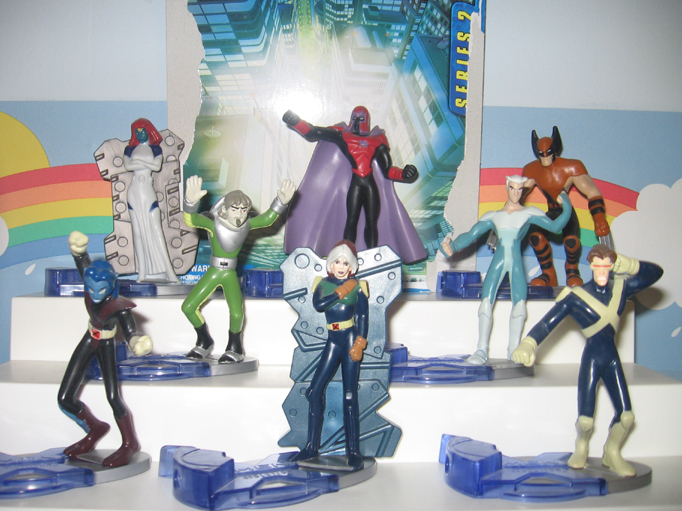 In 2001, Burger King released a series of 8 X-men Evolution Figurines that came packaged with a "Secret Viewer" plastic standing base, and a CDrom. The figurines are incapable of standing on their own, but they look good standing on the base so this isn't so bad. By holding the base up to the light, and looking through the lense, you can see a small image of the coresponding figurine, and a blurb about them and their powers. For a kids-meal toy, the figurines are solid. I've moved 4 times with mine, once across an ocean, and they've yet to show any dammage. The paint job is a little lax here and there, but overall it's actually pretty solid. As for looks, they look pretty good too. I'm a little unsatisfied with Toad and Kurt's overall molding, butand I feel like Pietro and Rogue could have had more dynamic poses, but again.... coming back to that these were free toys from a kids meal, I'm really quite satisfied.
What really shines here, above getting super awesome Evo toys, is that they included a CDrom. The CD rom comes with video clips, quizes, games- really the works. Though perhaps a little bit childish, I think any Evo-fan will be delighted to have these.
There were rumors for a more expansive toy line up, which you can read about HERE. While I think it's a shame we didn't get to see more characters in figurine form, I do feel like what they ended up offering was a solid package.

All titles, characters, character names, logos and related indicia are ™ and © their respective creators. All characters are used without permission and not for profit. Layout lovingly ripped off from Mangastyle.net.